What Is a Summons? 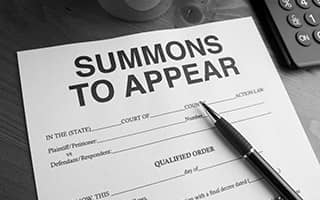 The definition of summons is as follows. A summons is a legal document that a court issues. Authorities issue summons, requiring individuals to appear in court. The warrant will state the reason and date for the appearance.

A summons provides a written answer to why someone has to attend court. An officer of the law or a clerk of the court may issue a warrant. Authorities typically give summons in civil suits.

For example, if an individual is being sued for breach of a contract. In this situation, a court may issue a summons to both parties. This ensures both sides can appear in court and are heard.

If either party fails to appear on the agreed-upon date, the case may fall into default judgment. If one party fails to show up, they forfeit their claim. A subpoena or warrant fulfills a similar role when dealing with criminal matters.

Why Are Summons Necessary?

Summons are one of the essential administrative procedures within the judicial branch of the United States. Summons allow the accused and accuser to meet in court while giving the defendant sufficient time to prepare a defense.

In addition, summons protect the rights of the accused. If the relevant authority does not fill out a summons correctly, the individual is not required to go through court proceedings. The warrant has to state what the accusation is clearly.

Why May One Receive a Summons? 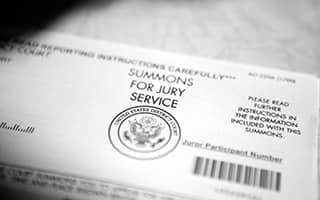 Individuals appear in court for several reasons. Some of the most common causes include:

What Are the Different Types of Summons?

There are many different types of summons. While there are differences between jurisdictions and legal systems, below are some of the more common types of a warrant. The most frequently-issued varieties include:

As mentioned previously, authorities may summon citizens to serve on a jury in many jurisdictions. In these cases, the individual requested is not part of the proceedings (neither the plaintiff nor the defendant) but acts as an objective observer.

Where there is a jury summons, individuals are legally mandated to attend. However, there are some exceptions. For example, individuals involved in the justice system or who provide vital community service (such as a vet) may be exempt from jury service.

A court summons is the most common type of summons. With this type of summons, individuals must appear in court to discuss a particular matter on a specific date.

A magistrate usually grants a court summons for less serious legal issues, such as traffic violations. Once the court issues a copy of the complaint, the accused can conduct their business while also preparing a defense (if necessary).

An administrative summons is a specialized type of summons issued when dealing with specific types of legal proceedings. These cases may require legal knowledge that many district courts do not have or deal with issues that fall outside of the jurisdiction of the traditional legal system.

Some examples of matters that may make use of an administrative summons include:

A citation summons is similar to a court summons with a few differences. A citation summons requires an individual to appear in front of a court on a specific date. These can be avoided by paying a fine (usually known as an 'on the spot fine').

In such scenarios, an individual that pays the fine does not have to go to court, though they can if they believe they were fined unjustly. However, doing so for frivolous reasons runs the risk of a harsher sentence or a more significant fine.

What Happens When a Summons Is Issued?

Before requesting a summons, an individual will usually seek legal advice from a legal professional to make sure their case is reasonable.

Following this, the plaintiff will issue the court a writ accusing an individual. Both the plaintiff and the accused will be given a copy of the summons. As mentioned previously, the most common causes for such action include the breach of a contract, traffic violations, or interference in one's enjoyment of their property.

In many cases, the accused and the plaintiff will agree without appearing in front of a judge. This is traditionally known as 'coming to a settlement'.

If both parties cannot settle, they will have to appear on a specific date by court order. The plaintiff or the plaintiff's attorney will present their case to a judge, and the accused will be allowed to defend themselves.

Depending on the matter, a jury may be involved. However, in many civil cases, only a judge will be present. Once the proceedings have concluded, the judge will come to a binding conclusion that both parties must follow.

If a result is not satisfactory to either party, they may request that a superior court (such as one of the appellate courts) have another look at the case.