What is a Traffic Court? 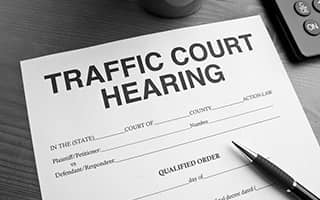 A traffic court is a special kind of court that deals with cases involving traffic tickets.

People who get a citation from a police officer in the United States may plead guilty and pay the fee through the mail, on the internet, or directly to the courtroom.

What Types of Cases are Handled by Traffic Courts?

Infractions are the most common type of traffic violation. A traffic infraction is the least severe traffic offense and a forbidden act or omission that is not a crime. Examples of typical infractions include:

Traffic infractions are "strict liability" charges, meaning a driver may be convicted of the violation regardless of intent. For instance, demonstrating that a motorist exceeded the stated speed limit is sufficient for a conviction; whether or not the driver was aware that the speeding is irrelevant.

Moving and nonmoving charges are subcategories of traffic infractions in several jurisdictions.

Typically, moving infractions are more severe than non-moving ones. Moving violations include speeding and disregarding a red light.

Generally, a traffic violation is deemed a crime if it is punishable by jail. Traffic violations can be misdemeanors or felonies. Offenses involving driving that are considered crimes include:

The classification of a criminal traffic infraction as a misdemeanor or felony differs by jurisdiction.

Some traffic violations are crimes regardless of the circumstances, while others become crimes if certain things happen that make the situation worse. For instance, some jurisdictions categorize excessive speeding as a misdemeanor if the driver exceeds the legal speed limit by a substantial margin.

In rare instances, driving-related misdemeanors may become felonies. Many states upgrade a traffic misdemeanor to a felony if:

In many jurisdictions, DUI is a misdemeanor traffic violation; however, it may be punishable as a felony if the offender had past DUI convictions or if the incident resulted in bodily harm or death.

What are Traffic Court Procedures? 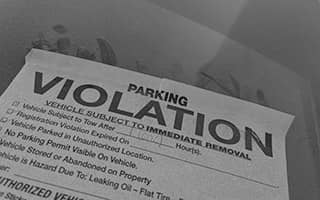 The classification, procedure, and punishment of driving-related crimes vary by state law. Traffic offenses are generally categorized and punished based on local laws, the offender's prior convictions, and if the infraction caused injury, death, or property damage.

In most states, minor traffic infractions such as speeding, running a red light, and distracted driving are not subject to jury trials. Therefore, if you contest a traffic ticket, a single judge will likely determine your guilt as opposed to a jury.

Here are some of the fundamentals of traffic bench trials.

Traffic court often has a lot of trials going on at the same time every day. Typically, the clerk calls out each case, and the motorist and officer who issued the citation come forward.

If the driver is present but the officer is absent, the motorist effectively wins the trial, and the judge throws out the ticket.

If all parties are present,  the trial will proceed.

In most cases, the lawyers deliver opening remarks describing what they believe the evidence will demonstrate. But, the proof in traffic trials is often accessible, and traffic courts are typically highly crowded.

Therefore, judges in traffic courts are often uninterested in hearing opening statements. Instead, after the court clerk has called the case, the traffic officer will begin presenting its evidence.

So, depending on whether a prosecutor is present, the officer will either answer prosecution inquiries or tell the story and answer court questions.

After the police have completed the questioning, the motorist or driver's attorney can cross-examine the officer and provide their questions.

The majority of citations provide court date and location information. Typically, the first court appearance is known as an "arraignment".

After everyone has entered the courthouse, a clerk or bailiff will explain the courtroom's procedures.

When the judge calls your case, you must approach a podium and announce your plea. You typically have two plea options: admitting fault or pleading not guilty.

Why not avoid court if you're going to accept guilt?

In most states, traffic judges have the right to decrease penalties; if you fail to appear in court, you will not be eligible for a reduction. It is a frequent practice in states that is permissible.

There is a significant probability that you will have a reduced fine if the court decreases the penalties of numerous other guilty pleaders.

If the court is not kind, you will likely face the same punishment if you enter a guilty plea.

Generally, pleading not guilty is akin to demanding a trial in traffic court.

The judge sets a date for your trial and summons the officer who issued the ticket to appear in court that day after you enter your plea.

There is at least one additional reason to plead not guilty, even if you don't want a trial: if the officer doesn't show up, that usually indicates you win the case.

Many drivers want trials not because they wish to contest their tickets but hoping that the police will not appear.

If the officer does appear in court and you do not choose to proceed with the trial, you may still be able to change your plea to not guilty. However, most judges will be less likely to decrease your fine or let you attend traffic school if you did not enter a guilty plea at your arraignment.

Courts may often order you to post bond when you plead guilty at arraignment. Typically, bail will not exceed the amount of your ticket's fine.

If you win in court, the judge will return your bail. If you lose, your fines will often apply to your posted bail.

But the consequences may include a fine, traffic school, and demerit points on the driver's license. A particular amount of points might result in higher insurance rates and license suspension.

A traffic misdemeanor is more severe than an infraction but less profound than a felony. In most jurisdictions, the maximum punishment for a misdemeanor conviction is one year in county prison. A felony is the most severe crime and is usually punishable by more than one year in state prison.

Other consequences for traffic violations include:

Depending on your driving record and place of residence, traffic school may be a viable alternative to paying your ticket. Most states require drivers who attend traffic school first to acknowledge guilt and pay the citation fee.

The court dismisses or eliminates the infraction from the driver's record after completion of traffic school, enabling the driver to avoid driver's license points.

What are the Differences Between Criminal and Traffic Courts?

Although minor traffic infractions are technically crimes in most states, they are often not dealt with in criminal courts.

Only the most severe driving-related crimes, such as driving under the influence (DUI), reckless driving, and vehicular manslaughter, are prosecuted in criminal court. The traffic court will hear cases involving minor violations of traffic legislation.

Less formal than other courtrooms, traffic courts have a relaxed atmosphere. Court-appointed counsel is often unavailable in traffic court. Consequently, unlike in criminal court, there will be many unrepresented litigants.

In addition, the stakes in traffic court are smaller than in criminal court; typically, the worst that can happen in traffic court is that the motorist is found guilty and fined. This one has a less scary and less rigorous environment than other courtrooms.

Where to Find Traffic Court Records?

You can use SearchQuarry to find traffic court records in the United States.

It is a public records site established in the United States with hundreds of pages and various free tools devoted to discussing and searching public records, including traffic court records.

SearchQuarry provides free resources, blog posts, and a premium members section for practically anything relating to public records. Its readily accessible free and paid material offers a "one-stop-shop" for a wide variety of public documents.

The free resources area has a court, the Department of Motor Vehicles (DMV), and several other government agency addresses.

In its members' area, most search categories are free and limitless. Also, detailed premium reports are available upon request.